Who was mark ashton?

“He was an everything person. An Irishman, a communist, an agitator, a lapsed Catholic who still went to mass very occasionally. He was very charismatic. His communism governed everything he did.”

Mark Ashton was a political activist who supported both the LGBT community and the mining community back in the 1980’s. Ashton is most famous for starting his own charity in 1985 to raise money for struggling mining families.

He is a man who left a legacy of equality, who promoted charity in a time of political disturbance and who raised thousands of pounds for those in need.

“And why should gay people like me support the miners?”

“Because miners dig for coal, which produces power, which allows gay people like us to dance to Bananarama till 3 o’clock in the morning.”

Mark Ashton was born in Oldham, Greater Manchester, in 1960. Following this, he and his family moved over to Northern Ireland when he was a toddler.

Mark grew up in Portrush, a small village in Northern Ireland, where the nearest large town was Derry (or Londonderry depending on your persuasion). Interestingly, in 2020 over 15,000 signatures were raised in favour of erecting a statue of Mark Ashton in Portrush. However, the motion was overturned due to political differences between the DUP and the cause for which Ashton fought.

Mark Ashton grew up among the increasing violence and political conflict in Northern Ireland in the 1970’s. Whatsmore, Ashton was living near Derry on Bloody Sunday, 1972, when British troops shot 26 unarmed protesters.

Mark studied at a catering college in Portrush before moving to London in 1978. One of his many jobs over the years was working behind the bar in the Conservative Club, King’s Cross. In fact,  a close friend of Marks once quoted that he would come to work with a blonde beehive wig on, and that he “was never sure if the patrons worked out that Mark was really a man.”

Ashton opened himself to a variety of new, alternative lifestyle’s in London. This included a brief dip into the drag scene and a long standing friendship with the members of The Undertones.

After a trip to Bangladesh in 1982 to see his father, Mark Ashton returned to the UK feeling rattled by the poverty he had seen there. Moreover, friends of Ashton’s recall that what he saw there was the influence behind his political activism.

It was his early year’s in London, his experiences with conflict ridden Northern Ireland, and his new discovery of poverty in Bangladesh, that inspired Mark to start becoming more politically active.

In 1983, Mark Ashton started to produce short films about relevant topical issues. In 1983, Ashton featured in Framed Youth: The Revenge of the Teenage Perverts. This was an LGBT forward film where straight people were interviewed on their view of homosexuality. 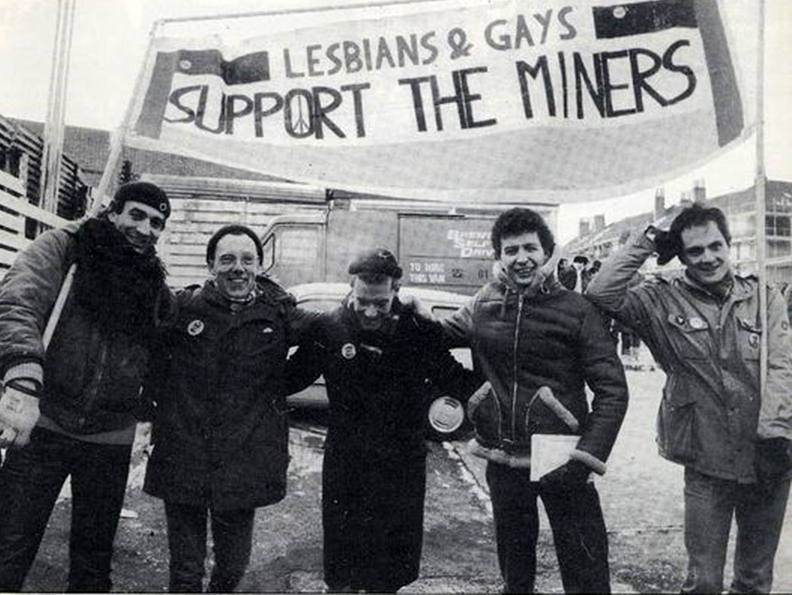 Mark Ashton achieved many things in his short life. Undoubtedly, Lesbians and Gays Support The Miners is his most impressive achievement.

In 1984, the miner’s strike was getting underway with what would turn out to be a year long battle.  Mark Ashton and his friend Mike Jackson decided that London’s LGBT scene needed to be doing more to support the miners. What followed was the birth of LGSM, a charity that aimed to financially support the families of England’s dying mining communities.

The charity held fundraisers, marches and events to raise money. In fact, the largest fundraising event that was held by LGSM was the “pits and perverts” benefit at Electric Ballroom, which raised £5,650. The charity subsequently formed groups in ten other cities across the UK, with numbers growing rapidly between each meeting.

“Support civil liberties and the struggle of lesbians and gay people. We welcome the links forged with South Wales and other areas. Our struggle is yours. Victory to the miners.”

A quote from LGSM at one of their rallies

Mark Ashton’s charity was active in a time where homophobia was common. The relationship between the people and the government was in a tumultuous place: people needed a positive influence. Out of the difficulties of the decade came “extraordinary examples of solidarity,” when the LGBT community came out to support the miners.

Mark Ashton was a profoundly active person in politics and social equality, not just with the LGBT community.

Throughout his life, Ashton was a member of the Communist Party of Great Britain, actively supported nuclear disarmament and was even the General Secretary of the Young Communist League.

Furthermore, Ashton was a volunteer at Switchboard, an LGBT charity that provides a helpline to vulnerable LGBT people.

When the LGSM collective began to calm down, Ashton started to look to other socially forward groups. Subsequently, in 1985, Mark Ashton joined Red Wedge, a collective of London musicians. Their aim was to engage younger people in politics by using modern methods, such as music and art.

In 2014, director Matthew Warchus decided to tell Mark Ashton’s story and put the successes of LGSM onto film.

“If 1 in 5 people are gay, then one in five miners must be too right? That’s at least a fifth of you that are happy to see us.”

The film received high praise for it’s accuracy and similarity to true events. It was also praised for it’s relatability and it’s success in capturing the heartfelt relationship between the charity and the miners they met.

Ben Schnetzer as Mark Ashton in Pride (2014) GIF thanks to https://filmdaily.tumblr.com/)

Death and battle with HIV

In 1987, he was admitted to hospital after being diagnosed with HIV. Just 12 days later, at the age of 26, Mark Ashton died of HIV related pneumonia. However, his death received significant attention from the LGBT community and his funeral was celebrated by many.

Ashton died before Section 28 was introduced and so never had the chance to protest against it. However, if he had, it’s likely that his legacy would be even more impressive than it already is. He definitely would have been at the front of any anti-section 28 rallies.

“So if you thought the Gay Pride march in ’85 was moving, you should have seen the funeral. There were miners and miners’ wives sobbing. His death was like a stake in the heart, even for people who disagreed with his politics.”

The Mark Ashton Trust was created just after Mark’s death, as a way of raising money for those suffering with HIV. Furthermore, The Terrance Higgins Trust, the UK’s largest HIV and LGBT sexual health charity, also features the Mark Ashton Red Ribbon fund, which has raised £43,114,63 for HIV awareness to date (23/02/2021).

In Paris, there is a public garden named after Ashton, as a commemoration to all those who have lost their lives due to HIV. Also, on what would have been Mark Ashton’s 57th birthday, a blue plaque was raised above Gays the Word in his honour. Gays the Word is an independent bookshop in London and is the oldest LGBT bookshop in the UK. In fact, Gays The Word was frequently a meeting place for LGSM.

Mark Ashton’s legacy lies in his ability to unite communities in times of trouble. Undoubtedly, he deserves to be one of the faces of this year’s LGBT History Month.

At the time, the LGBT community and the mining community were the last two groups that anyone would put together. But with Mark’s work, relentless attitude, and a little perseverance, LGSM raised the equivalent of over £20,000 in today’s money.

Mark Ashton wanted to show that the LGBT community and the mining community had more in common than the differences that put them apart.

He had the courage to stand up for the rights of the LGBT and mining communities in a time when doing so put you at risk of personal, social and professional harm. Whatsmore, our freedom to protest and to speak up about LGBT rights is thanks to people like Mark Ashton. 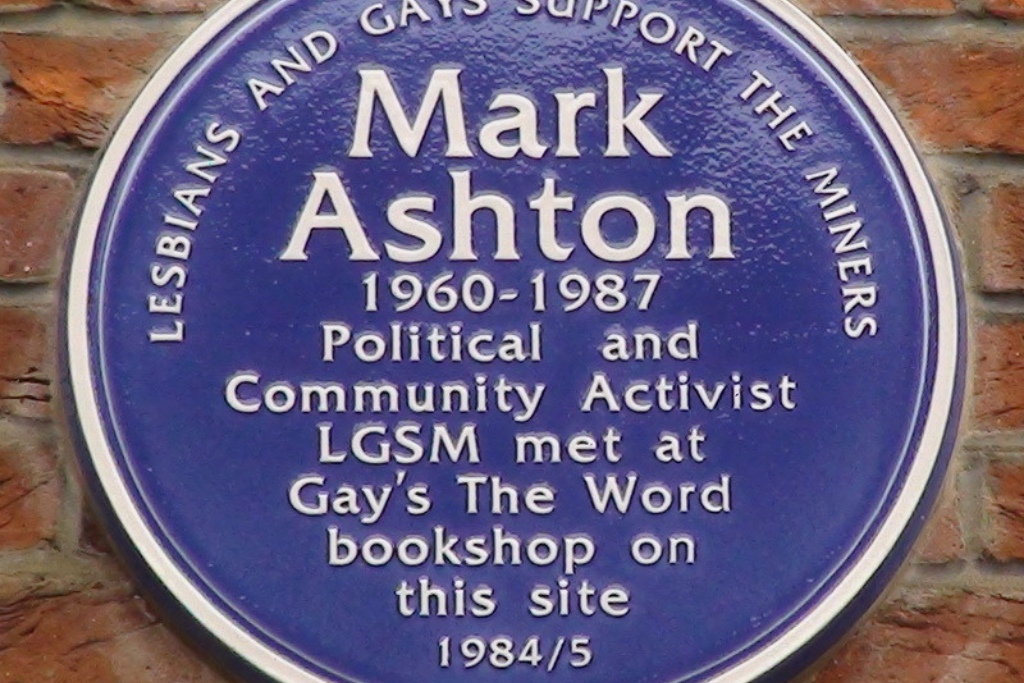 What Is A Community Order Offence?

In the UK, community orders are often used to punish first-time offenders who commit serious crimes. These types of sentences involve individuals carrying out specific tasks and requirements in the community, opposed to serving time in prison. If you are facing an...

Transfer of Equity: How Does it Work?

Transfer of Equity | 5 Minute Read.Transferring the equity of a property is the process of removing or adding someone to the property's title deed. A transfer of equity will often come into play when major live changes occur, yet will allow you to change the ownership...

Indictable Offences: Everything You Need To Know | LGBT Lawyers

Indictable Offences | Read Time 2-4 MinutesIn total, 3 categories define how crime is dealt with through the criminal justice system in the UK. These categories are used to determine the seriousness of a criminal offence and the court where the offence will be tried....