Lily Parr: 10 Things You Need To Know About the Football Legend

2. Playing For The Most Successful Women’s Football Team To Date.

6. Lilly Parr Played in One of The First Ever International Women’s Football Games.

7. Continuing To Play Despite Politics.

9. She Was an LGBT and Feminist Pioneer.

10. Lily Parr is the First Woman to be Inducted into the Football Museums Hall of Fame.

11. She was Hugely Influential on Women’s Rights in Football.

Who Exactly Was Lily Parr?

To some, the name Lily Parr may not be common knowledge. I must admit, until this year’s LGBT History Month, I myself was unaware of who Lily Parr was.

But Lily Parr is an incredible woman, who is certainly deserving of being one of the faces of this year’s LGBT History Month.

She is the secret, unstoppable pioneer of ladies’ football.

Lily Parr was a robust, 6ft woman, with jet black hair, striking features and a “masculine aura.” Her height and build allowed to her to play sports as a child, and as a teenager, she would play football against both girls’ and boys’ teams.

What followed was a legendary career as one of the world’s most impressive women’s football players. 116 year’s after her birth, LGBT Lawyers takes a look at her life, her experiences as a gay woman and her most important achievements. 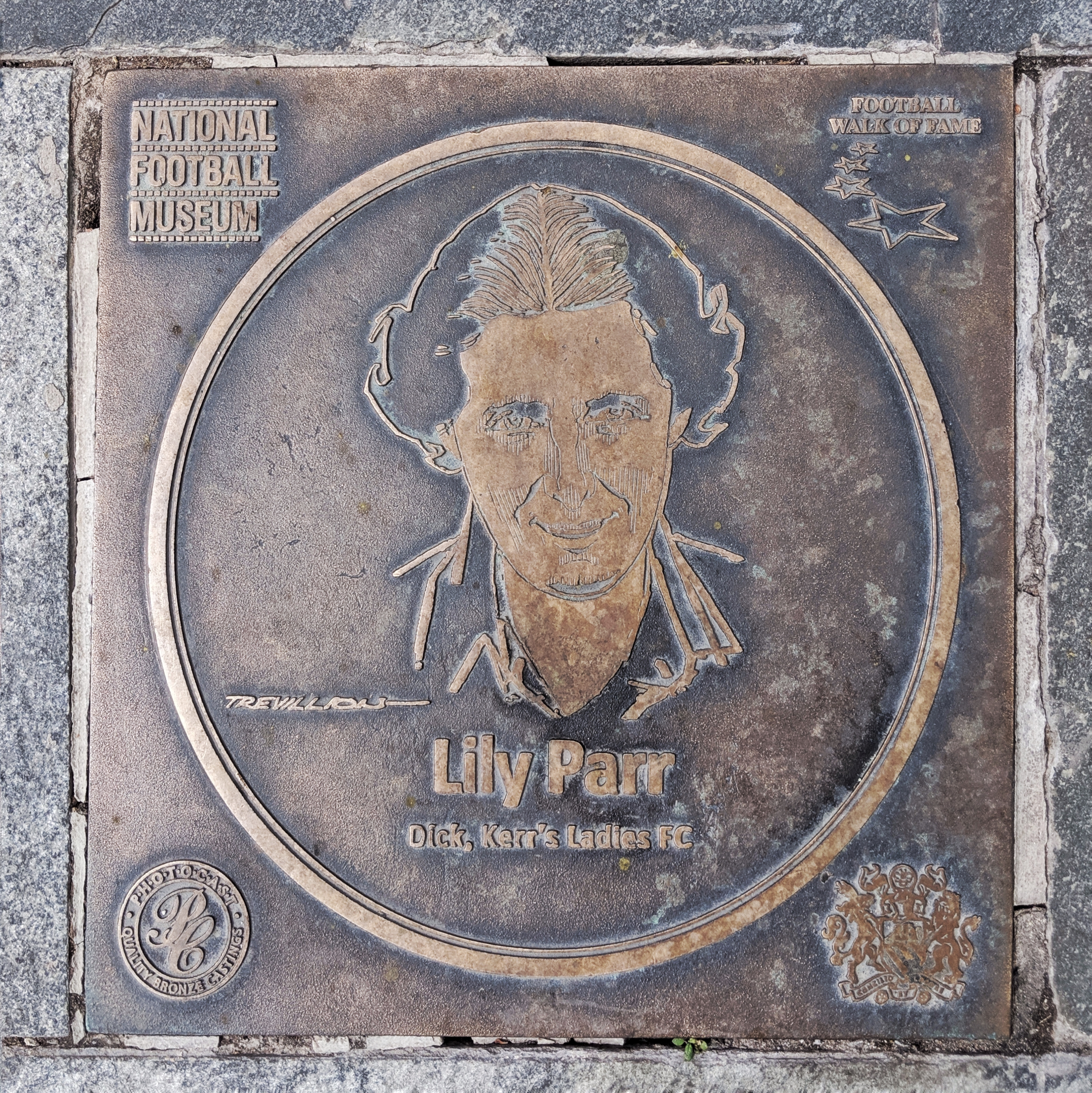 Although women’s football came into fruition all the way back at the end of the 19th Century, it really took off in the early 1900s.

When WW1 broke out in 1918, thousands of British men were sent off to battle. Women subsequently had to quickly assume masculine roles, often working in factories, industries and on farmland.

Encouraged to keep active by their employers, over 150 women’s football teams sprung up across England, each one representing their relevant factories.

At 13 year’s old, Lily Parr started playing football for St Helen’s Ladies, a small team named after the town in Lancashire where she was from.

Parr then moved on to start playing football for Dick, Kerr’s Ladies, the factory where she was working at the time of the war. The factory mainly produced railway equipment, but turned their efforts to making munitions when the war started.

Dick, Kerr’s Ladies is one of the earliest known women’s association football teams in the UK. The team was active for 48 year’s and played 838 matches, winning 759. They were one of the most famous, and best achieving women’s football teams.

Born in 1905 in St Helen’s, Lancashire, Lily Parr was different from the start.

Parr never wanted to engage in “girly” activities as a child. She defied the stereotypical feminine role by refusing to take part in the sewing and cooking activities organised by her mother.

She fought profusely against the stereotypes that women were given and was always true to herself and her sexuality. An imposing woman, Parr stood tall (literally) in the face of the many men who surrounded her profession.

She hated being called a lady, or lady like, and would always smoke cigarettes on the side-lines during matches.

In her first season playing for Dick, Kerr’s Ladies, Parr scored 43 goals. In her first year with the club she scored 108 goals. She was only 14 year’s old.

Her immense skills and abilities on the pitch rapidly started attracting fans and crowds, all of whom came to watch her play.

In her whole career, Lily Parr scored 986 goals. She had a reputation for her ability to kick harder than any player she was up against, both male and female.

“We have raised over £100,000 in this country and in foreign lands for charity.”

The Dick, Kerr’s Ladies were also renowned for their charitable events. With Lily Parr as their star player, the team would put on charitable matches for the public. The crowd for these matches ranged in size from 4,000-50,000 fans. Between 1919 and 1951, Lily Parr and her team raised the equivalent of £7 million for charity. 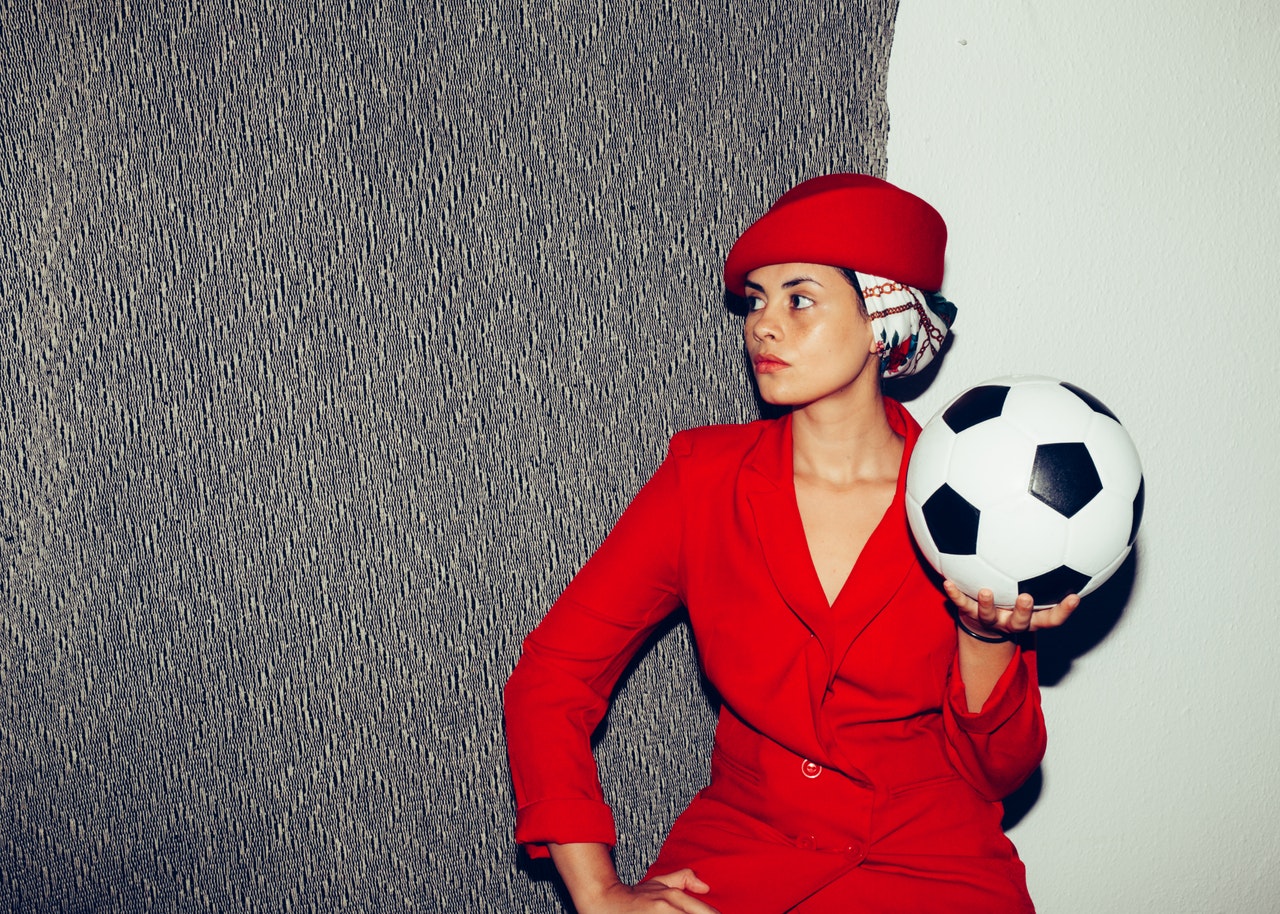 Parr was her team’s (Not So) secret weapon

Lily Parr was feared and respected on the pitch.

She had a notoriously powerful left foot, ran faster and hit with more power than any other player. As a child, Lily Parr was as good at other sports, mainly rugby, as she was at football.

In fact, in 1922, Parr even challenged the American women’s Olympic relay team, beating them with ease.

To put Lily Parr’s performance into context, she scored 280 more goals in her career than Cristiano Ronaldo has so far.

“She had a kick like a mule… Parr was the only person I knew who could lift a dead ball, the old heavy leather ball, from the left wing over to me on the right and nearly knock me out with the force of the shot.”

In 1920, Lily Parr played in one of the earliest recognised women’s football matches, between England and France. Playing against the Paris team, Lily Parr led Dick, Kerr’s Ladies to victory. Alice Millait, captain of the Parisian team and advocate for women’s football rights, once famously quoted, “in my opinion, football is not wrong for women. I do not think it is un-womanly to play football. Men play fast, but not vigorous football.”

After her triumphs in France, Parr later went on to tour the USA, parts of the UK and France for a second time. An American newspaper even quoted her as “the most brilliant female player in the world.”

She continued to play despite politics

When the war concluded, the Conservative government of the time politicised the sport. They alleged many of the charitable matches hosted by Dick, Kerr’s Ladies were actually helping to fund the Labour movement.

Prior to the war concluding, women’s football was almost non-existent, but its meteoric rise in popularity had outpaced societal views on gender in sport. Now that the men were back from the trenches and societal and gender norms were re-asserting themselves women’s football was deemed inappropriate. According to this shift in attitudes back to ‘the norm’, the FA needed to be seen to be protecting the sport.

In December 1921, the FA banned ladies’ football outright, under grounds that it was a men’s sport.

The ban was not revoked until the early 1970’s.

“Complaints have been made as to football being played by women. the Council feel impelled to express their strong opinion that the game of football is quite unsuitable for females and ought not to be encouraged.”

A statement released by the FA in 1921

Lily Parr’s life outside of football largely remains a mystery to the general public.

In 1919, just after the war, English Electric bought out Dick, Kerr & Co. and made Parr and her teammates redundant. Following this, Parr started working at Preston Whittingham Hospital and Lunatic Asylum, where she trained as a nurse.

Although Parr’s semi-professional career was over, she continued to play as an amateur and toured the USA, playing some (but not many) professional games.

She also continued to play football on the side during her career as a nurse and played her last ever football match at the age of 45. 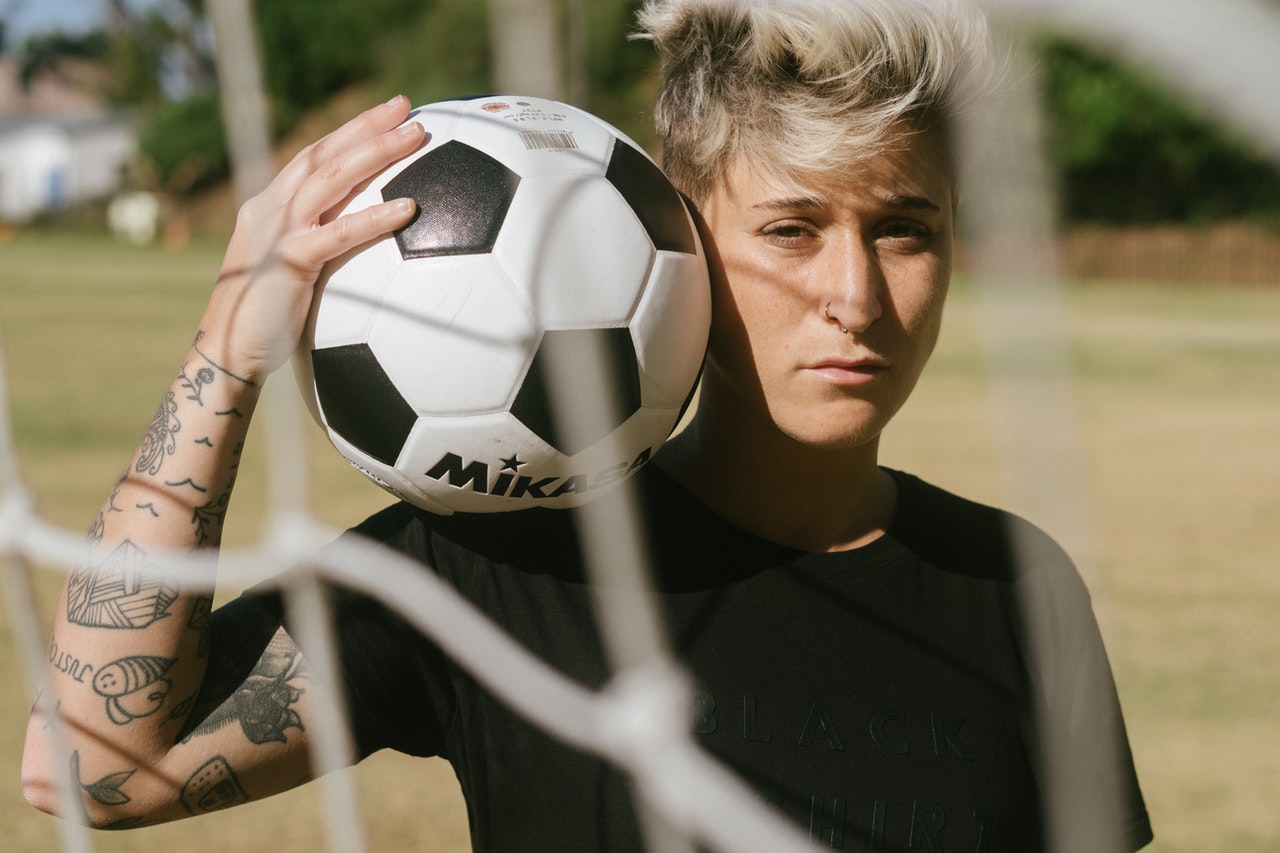 She was an LGBT and Feminist pioneer

Whilst working at the hospital, Lily Parr met her partner Mary.

At the time, LGBT women were few and far between, and were very rarely spoken about. But Lily and Mary refused to hide their sexuality, and were open and outright with their love for each other.

Mary and Lily were both so open with their sexuality that their relationship very seldom faced criticism from others.

Lily and Mary bought a house in Preston, and remained together for the rest of their days.

In 1978, Lily Parr passed away from breast cancer. She developed the illness 11 year’s before her death. At least she was alive to see the FA revoke the ban against ladies football.

In 2002, the National Football Museum inducted Lily Parr into their Hall of Fame.

Years later, in May 2019, sculptor Hannah Stewart designed a statue of Parr, which was unveiled later that year in the National Football Museum.

This now stands as the only female statue among 110 male statues.

In spring of 2021, the National Football Museum will create a specific gallery inside the museum dedicated to Lily Parr and her life achievements.

Marzena Bogdanowicz, the head of marketing for women’s football at the FA.

Lily Parr truly was an icon and was hugely influential for not just LGBT and women’s rights, but also for female football players across the country. Were it not for Lily Parr and the other women of the Dick, Kerr’s Ladies football club, women’s football would not have the power that it does today.

Between 2007-2009, LGBT football teams from the countries that Parr visited during her lifetime (England, France and the USA) played in the Lily Parr Exhibition Trophy tournament. And this year, we are lucky enough to have Lily Parr as one of the faces of LGBT History Month.

Although Lily Parr’s achievements as an LGBT woman may have been overlooked until now, it’s important that we use LGBT History Month to honour them and her. She was bold enough to take on a man’s sport as a gay woman, and always lived her life true to who she was.

“The impact and legacy of women like Lily on the development of women’s football regionally, nationally and internationally, is highly significant and under-represented.” 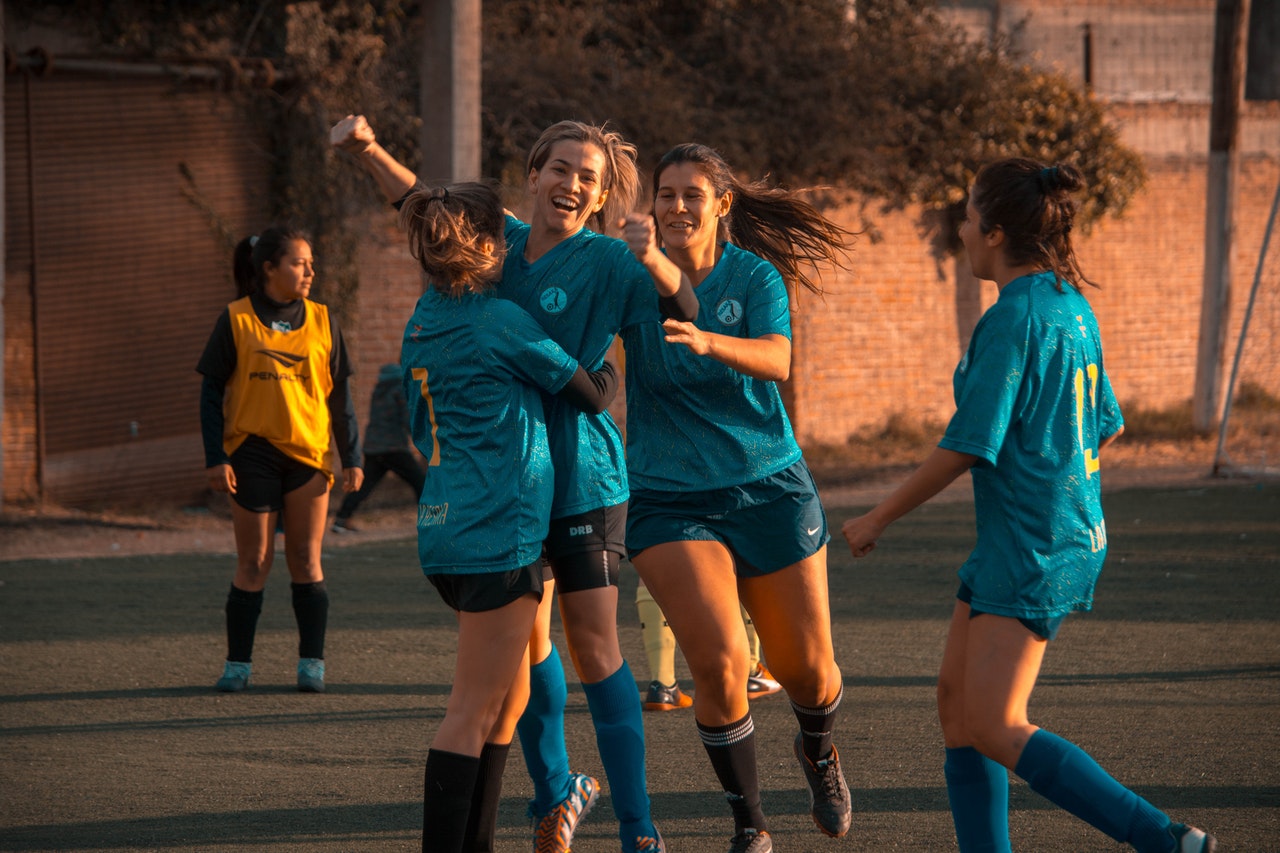