The Same-Sex Divorce Process: What do I Need to Know?

Is the same-sex divorce process the same as opposite sex-divorce?

On July 17 2013, the Coalition Government introduced same-sex marriages following the approval of the Marriage (Same-Sex Couples) Act. The first same-sex marriages took place shortly after the official passing of the legislation on March 29 2014.

Sadly, just like marriages between heterosexual couples, things don’t always work and relationships can break down. The Office of National Statistics found the most common reason for same-sex divorce in 2019 was unreasonable behaviour, swiftly followed by adultery.

The Office for National Statistics also revealed that in 2019 there were 107,599 divorces in England and Wales, up by nearly a 1/5 from the previous year. Furthermore, the research also found divorces between same-sex couples doubled from 428 in 2018 to 822 in 2019.

The difference between same-sex divorce and opposite-sex divorce is that adultery is not applicable. Adultery cannot be used because, in law, adultery specifically relates to sex between a man and a woman.

What are the grounds for same-sex divorce?

The court can only grant a same-sex divorce if they are satisfied that the marriage has irretrievably broken down. The proof that a marriage has reached an irretrievable state has to fall under one of the four specific grounds. These include:

For a heterosexual divorce, there is a 5th option you can base the divorce on, which is adultery.

However, adultery cannot be used as grounds in the same-sex divorce process. This is because, legally, adultery has to be between a man and a woman.

You must also be meet at least one of the following criteria to qualify for a divorce in the UK.

1. Both be domiciled in England and Wales.

2. You were both living in England or Wales for at least one year immediately prior to the petition being filed.

3. You must have been married for a minimum of 12 months

How does the same-sex divorce process work?

Same-sex divorce and heterosexual divorce will follow the same divorce process. What will differ will be additional considerations to the process, such as finances and child arrangements.

The divorce process starts with filing a divorce petition to the court. If the court then deems that you are entitled to a divorce, they will grant you a Conditional Order (the decree nisi).

There are a total of ten stages to same-sex divorce process, which include:

The person who initiates the divorce is known as the Petitioner. They are the one who will file for divorce and will have to fill in a D8 form (the divorce petition).

Once filled in, the Petitioner sends two, or multiple, copies of the D8 (together with a copy of their marriage certificate) to their nearest divorce court.

informing the other partner

Once the divorce petition has been sent, the court will send a copy of the petition to the other partner, known as the Respondent.

The Respondent will then need to reply to the court with their answer. This is where the divorce process can go down one of two routes.

The Response from the respondent will be sent back to the Petitioner by the court.

Once the last stage has been complete, the court sends a copy of the acknowledgement of service form to the petitioner.

if the divorce is contested

The Respondent has 21 days to oppose the divorce. To do so, they must send the court a response clearly defining why the divorce should not go ahead.

It can be noted, the Respondent can also opt to start a divorce proceeding against the original Petitioner. For example, the respondent may initiate a counter-claim about the unreasonable behaviour of that person.

What will follow entirely depends on the specific case, what the grounds are, and other aspects involved such as children, finances and property.

Assuming the divorce is uncontested, the Petitioner will apply to the court for the grant of decree nisi, the first order in ending your marriage.

This application will also include a copy of the Respondent’s response to the divorce petition and a statement form. The Petitioner will confirm the facts set out in the original divorce petition.

It can be noted, there are five types of statement the Respondent can choose from and they depend on the grounds for the divorce.

If the Judge agrees with the divorce, they will grant the decree nisi. At this stage, both parties can consider their financial options and childcare options, as well as apply for the decree absolute.

However, if the Respondent opposes the divorce, there will be a court hearing at this stage. The Judge may send both parties a “notice of refusal of the Judge’s certificate form”, stating the reasons why the partners cannot divorce.

After the decree nisi has been granted, the petitioner has six weeks to apply for a decree absolute. The decree absolute is the second legal document that fully ends the marriage.

If the Petitioner fails to apply for a decree absolute, the Respondent can apply using an application notice form.

The decree absolute is the final stage of divorce and marks the end of marriage in legal terms. 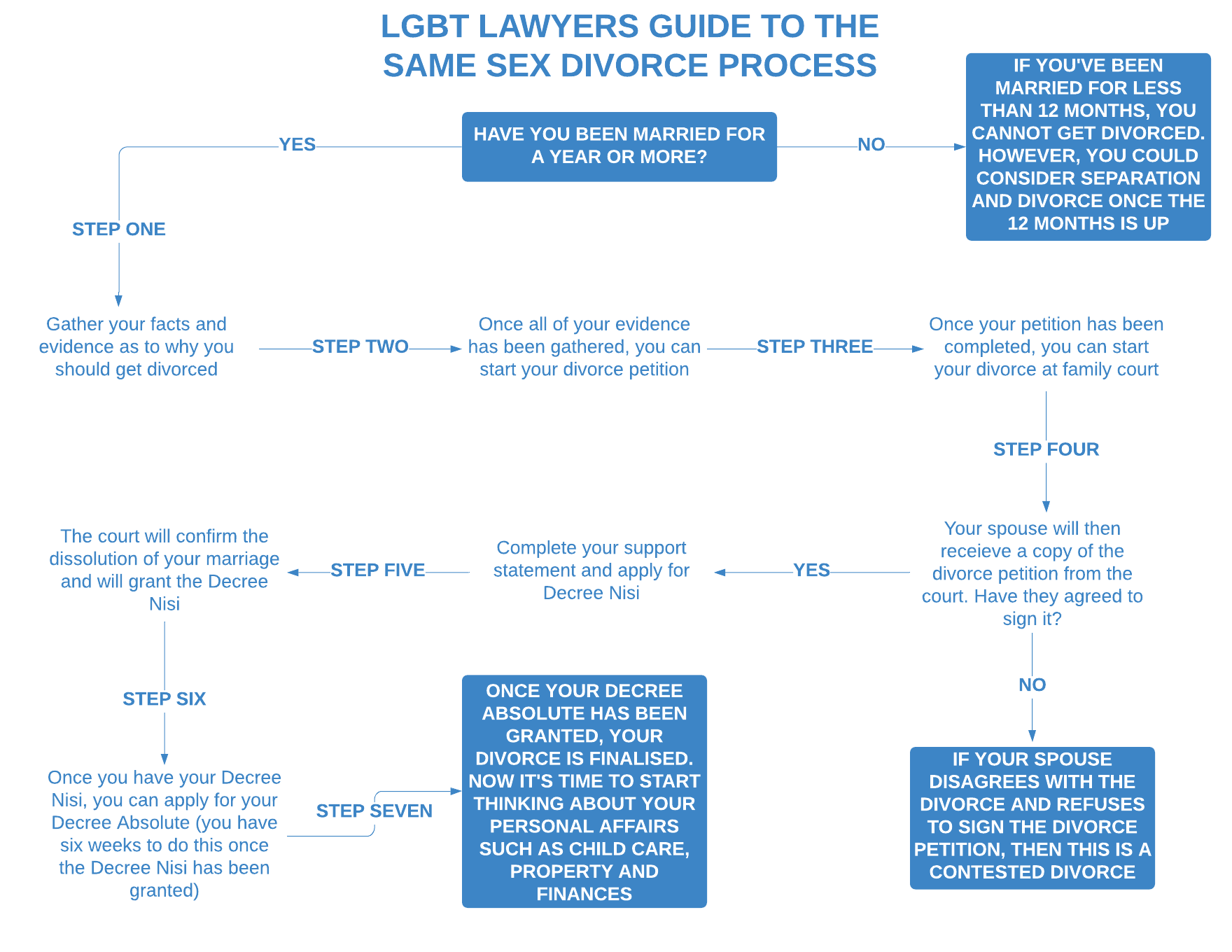 How can we help

The difficulty with the divorce process is everything else that comes with it.

Unfortunately, childcare, finances, assets, property and many other elements don’t automatically come under the divorce process. They each require separate attention, for which you may need to go to court to finalise.

Whatsmore, disputes can unfold during the divorce process. For example, if the divorce itself is contested or if financial responsibility isn’t clear, you may need a court order from a Judge.

what are the risks of a DIY divorce?

Whilst you can do a “DIY divorce”, it can be easy to make the following mistakes without a lawyer to guide you through the process:

So when do I need a lawyer?

It’s essential that you find a lawyer because they can advise you on the best options available to your individual situation. LGBT Lawyers can connect you with an expert lawyer who won’t treat you differently because of your sexual orientation.